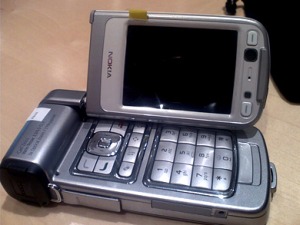 Nokia has begun shipping two new smartphones in its N series: the N93 and N73. Both of them run S60 Third Edition of the Symbian OS 9. Nokia describes the N93 as "the ultimate mobile device for spontaneous video recording." This device has a 3.2 megapixel camera with Carl Zeiss optics, 3x optical zoom, etc. This smartphone supports GSM with EDGE and WCDMA. Also connectivity includes Wi-Fi and Bluetooth.
Posted by Spectator at 1:22 PM No comments:

Nokia has opened the first flagship store in the USA

Nokia are on Saturday checked out the full line of Nokia's products at the opening of the giant mobile phone maker's first US flagship store, complete with huge LCD and LED panels and hands-on time with cutting edge S60 devices. It was the first of four flagship stores that Nokia plans to open in the North America, and the second in the world. Posted by Spectator at 7:59 AM No comments:

Nokia E50 have been approved for US

According to the FCC report the smallest S60 smartphone Nokia E50 is ready for the US. This phone offers enterprises a cost-efficient way to extend mobility to a broader range of employees, by providing employees an access to corporate email whenever required. Also some sources have said that it has two versions - with/without the camera.
Posted by Spectator at 12:10 PM No comments:

Symbian OS v.9.3 have been released

Symbian has announced of availability for developer of new version of the Symbian OS. Symbian OS v9.3 is targeted for 2.5G, 3G and HSDPA networks. There are new development tools for Symbian OS: Symbian OS v9.3 is fully backwards compatible with previous versions in the v9 family. New hardware support: New operator services:

And new updated statistics for Symbian – At the end of Q1 2006 70.5 million Symbian OS phones had been shipped by licensees worldwide to over 250 major network operators.

Posted by Spectator at 6:58 PM No comments:

Jo Stichbury, the author of Symbian OS Explained, is maintaining a blog which is targeted at Symbian Descriptors. This information could be very helpful to Symbian developers.
Posted by Spectator at 6:18 AM No comments:

Canada.com have published an article from National Post about this Nokia Canada initiative. Nokia Canada teams up with Matchstick, a Toronto company, to spread the message about Nokia's new camera phone through the blogging community. If the bloggers have over 400 hits a day, are young and hip and use Rogers Wireless service, they qualified for a free phone. "We believe that is one of the most honest forms of advertising out there," said Mila Mironova, brand development manager with Nokia Canada.
Posted by Spectator at 3:28 AM No comments: